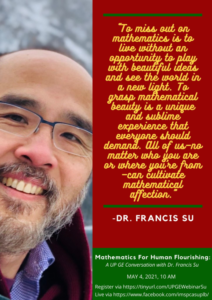 Dr. Francis Su, a former president of the Mathematical Association of America (MAA) and currently a professor at Harvey Mudd College in California, delivered his inspirational talk last May 4, 2021 in a webinar hosted by the Institute of Mathematical Sciences and Physics (IMSP), in partnership with UP Office of the Vice President for Academic Affairs (OVPAA).

VPAA Maria Cynthia Rose B. Bautista opened the program with stories from her Vietnamese friends about students who served in the Vietnam War and how their experiences relate to the realities of education in the current pandemic.

Dr. Su is an expert in geometry, topology, combinatorics, and game theory. He is well known for his popular speeches and features in Quanta, Wired, and the New York Times. His speech delivered to MAA spawned his Yale University Press book Mathematics for Human Flourishing, the recipient of the 2021 Euler Book Prize. His book included reflections with Christopher Jackson, a person who was incarcerated for his involvement with armed robberies and studied math on his own in prison.

He first talked about mathematics, why people learn math, and who has potential in studying mathematics. He then shared his struggles with learning math in rural South Texas where it was common for students to not pursue higher education. It was also not surprising to him when a professor remarked that he “did not have what it takes to be a successful mathematician”. Despite these experiences, he still credited his admission into Harvard University PhD Mathematics program to his teachers and professors, as well as his family and friends.

According to him, we pass on attitudes from where we create societal norms towards mathematics. Aside from learning mathematics to be college- and career-ready, it helps people flourish.

“Mathematics is for human flourishing, a certain wholeness of being and doing, of realizing one’s potential and helping others to do the same, of acting with honor and treating others with dignity, of living with integrity even in challenging circumstances… A well-lived life [is a] life of human flourishing,” Dr. Su posited in his talk.

Dr. Su also presented mathematics as manifestations of several human desires – beauty, exploration, play, truth, power, justice, freedom and love. He ended his presentation by challenging the audience to believe that everyone can flourish in mathematics and to read someone differently. The latter is inspired by a quote from Simone Weil’s 1947 book, Gravity and Grace: “Every being cries out silently to be read differently.”

After the talk, he responded to a variety of questions from the audience. Students actively engaged in this discussion – shifting from a qualitative grading scheme, the future of mathematics education in the Philippines, truth-telling in governance, the US political climate, to Victor Hugo.

The UPLB Vice Chancellor for Academic Affairs Jean O. Loyola expressed her gratitude to Dr. Su for helping the students, as well as the teachers, see the beauty of math, and remove negative attitudes students have towards mathematics. He made teaching and learning math more exciting, through the UP General Education (GE) courses, according to VCAA Loyola.

At least 600 people attended the webinar streamed on Facebook Live via Zoom Webinar. As of press time, the replay had more than three thousand views on the official Facebook page of IMSP. The attendees were mathematics educators all over the Philippines (from different school levels with various professions) and students.

Several audience members were impressed by how Dr. Su was able to tailor his presentation to the Philippine setting by incorporating artworks from notable artists such as Fernando Amorsolo. Another audience thought that his talk was “very insightful and profound”.

The webinar was organized as a part of the UP System Office of International Linkages World Experts Lecture Series.